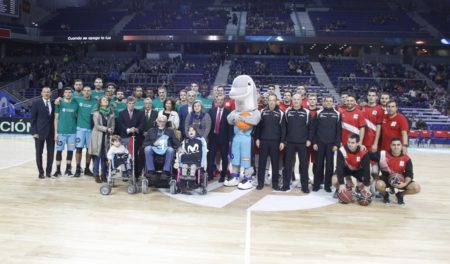 On Sunday 12 November, homage was paid to the ALS patients, who in Spain have more than 4000 people affected by the disease, just before the derby between Movistar Estudiantes and Montakit Fuenlabrada.

Both teams, authorities, relatives and ALS patients posed in a photo, an act that was joined by the party’s arbitration trio.

Amyotrophic Lateral Sclerosis (ALS), also known as Lou Gehrig’s Disease, is a neurodegenerative disease that affects motor neurons of the brain, brain stem and spinal cord, which are the cells responsible for transmitting the order of voluntary brain movement to muscles.

The consequence is progressive muscle weakness that progresses towards total paralysis of the patient and also affects the ability to speak, chew, swallow and breathe. On the other hand, functions such as sensitivity and intelligence are not affected and eye movements are not affected, as motor neurons have more resistance.

We leave you a video posted on the website of Club Estudiantes:

And we also share a video with you from the Spanish Foundation for the Promotion of Research on Amyotrophic Lateral Sclerosis (FUNDELA), to raise awareness about this disease:

You can find out more about which cookies we are using or switch them off in settings.

This website uses cookies so that we can provide you with the best user experience possible. Cookie information is stored in your browser and performs functions such as recognising you when you return to our website and helping our team to understand which sections of the website you find most interesting and useful.

Strictly Necessary Cookie should be enabled at all times so that we can save your preferences for cookie settings.

If you disable this cookie, we will not be able to save your preferences. This means that every time you visit this website you will need to enable or disable cookies again.